James Ramon Jones was born to Ramon and Ada Blessing Jones on November 6, 1921. He enlisted in the United States Army upon graduation from high school in his native Robinson, Illinois, in 1939 and was sent to Hawaii, where he served in the 27th Infantry. After the Japanese attack on Pearl Harbor in December 1941 Jones studied at the University of Hawaii while awaiting his regiment’s combat assignment. At the end of 1942 his unit landed on Guadalcanal, where he was wounded in January 1943. Transferred to a military hospital in Memphis for extended treatment, Jones received an honorable discharge from the army in 1944 and returned to Illinois to live with Lowney Handy and her husband Harry. Jones began to pursue a literary career, moving to New York in early 1945 to attend New York University. There he met Maxwell Perkins of Scribner’s and was sufficiently encouraged to submit a novel entitled “They Shall Inherit the Laughter” in early 1946. Perkins turned the manuscript down but gave Jones an advance on a story idea about the pre-WWII army in Hawaii.

Back in Illinois, Jones wrought his army experiences into a novel, From Here to Eternity, published by Scribner’s in 1951. The astonishing critical and popular success of Eternity launched his career, and virtually guaranteed a market for his subsequent work. Part of the proceeds from Eternity were used by Jones to help the Handys establish a writers’ colony in Marshall, Illinois.

After his marriage to Gloria Mosolino and the publication, to mixed reviews, of Some Came Running, Jones left Illinois for New York and, eventually, Paris, where the couple settled in 1959. Their Paris sojourn became an extended residence, and James and Gloria were central figures in the postwar European literary scene. In the early 1960s Jones published The Pistol and (in continuation of Eternity) The Thin Red Line. He also began a subsidiary career as a script writer for motion pictures. 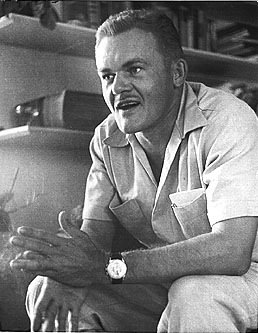 Responding to an attractive multi-book contract offer from Dell, Jones left Scribner’s at the end of 1964. In the following years he published Go to the Widow-maker and The Ice-cream Headache and Other Stories, but work on the final volume of his military trilogy was interrupted twice to produce The Merry Month of May and A Touch of Danger. In the years after 1964 Jones served as a European talent scout for Dell and spent considerable time critiquing and encouraging young writers.

Following a reportorial trip to Viet Nam in early 1973 Jones published Viet Journal and began to think seriously of a return to the United States. In 1974 he accepted a one-year teaching position at Florida International University in Miami, and wrote the text for the illustrated history WWII. At the end of his FIU tenure, James Jones moved to Sagaponack, Long Island, and began again to work on Whistle, the culmination of the story begun with From Here to Eternity. Struggling with increasing health problems, Jones worked in 1976 and early 1977 to complete Whistle. Following his death on May 9, 1977, his friend Willie Morris added an outline of the unfinished final chapters of the novel, which was published in 1978.” (norman.hrc.utexas.edu)